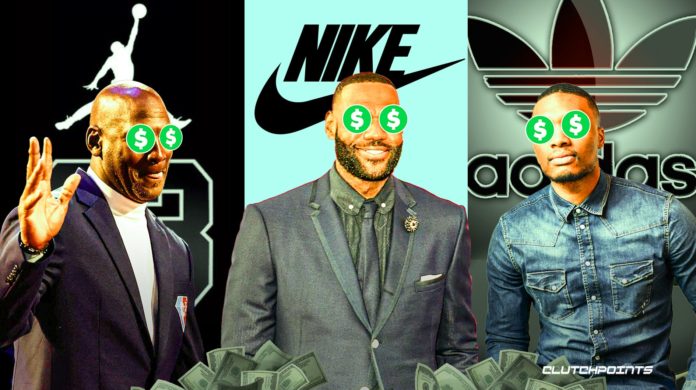 While NBA players are being paid a lot by their teams, some players are also getting paid by brands in the form of endorsement deals. For brands, this helps them build credibility and allows them to market their products. Below, we’ll discuss the biggest NBA player deals ever.

In the NBA landscape, we’ve seen phone brands, fast-food chains, card trading, and gaming companies tap NBA players to endorse their products. While these endorsement deals were lucrative, none have yet to match the endorsement deals given by notable shoe and apparel brands. For this piece, let’s take a look at the 10 most lucrative off-court NBA player deals of all time.

Kobe Bryant became one of the greatest scorers in NBA history. He initially signed a six-year deal with Adidas as a teenager. However, Kobe would never re-sign with the brand after the deal expired.

With an incredible work ethic and an unstoppable fadeaway, it was a great choice for Nike to pick up the Laker. While wearing his signature Nikes, Kobe would go on to win several championships with the LA including a back-to-back in 2009 and 2010. And later on, Bryant would finish his career as among the greatest players to play on the NBA hardwood.

Even if Bryant has already passed, Nike has continued their partnership with the late legend.

NBA players often opt to sign with Nike or Adidas. But for Klay, he chose to sign with Chinese brand, Anta. Although Anta isn’t quite as popular, they were willing to pay the Warriors star loads of money. One of the more interesting NBA player deals.

And for Anta, it isn’t a bad investment at all. Thompson is currently a four time NBA champion and has already made five All-Star appearances. Furthermore, he is one of the greatest shooters of the game.

Instead of joining his father’s Big Baller Brand, LaMelo chose to sign with Puma. However, who can blame him? Ball’s deal with Puma was worth $100 million and will also include access to the brand’s private jet.

With Puma coming back from a hiatus in the basketball landscape, signing up Ball wasn’t a bad move. The youngest Ball brother wasted no time in establishing himself in the league by winning the Rookie of the Year and making an All-Star appearance in 2022.

Damian Lillard is the face of the Blazers franchise and one of the most-watched stars today. He’s got other endorsement deals such as Gatorade, Spotify, and JBL. However, none would top his lucrative deal with Adidas that he signed when he was only a sophomore in the NBA.

Lillard is making a lot of money on and off the court. On top of his deal with Adidas, Lillard signed a monster extension in July 2022, worth $122 million.

Everyone and Adidas thought Derrick Rose was going to be the next big thing especially after becoming the youngest player to win it. Adidas offered a superstar-like deal to Rose. But as we all know, it didn’t pan out due to injuries.

If there’s any consolation, Rose did turn out to be a solid role player. Furthermore, he pieced together one of the best comebacks in recent memory.

James Harden worked from being a sixth man in Oklahoma to becoming an MVP in Houston. While his NBA journey allowed him to earn millions of dollars, the same can be said about his endorsement deal with Adidas.

Stephen Curry is easily the best shooter ever. His game has changed the way the entire league has played. Because of this, it isn’t a surprise that Curry gets paid a whole lot to wear their sneakers.

Although Curry is signed to a lucrative deal, word has it that Under Armour and Curry’s camp are working on a lifetime deal, worth at least a billion dollars.

Kevin Durant is next to impossible to guard. Standing at 7ft tall with the ability to score, the Slim Reaper is just lethal offensively. While he has stayed with Nike for his entire career, Under Armour did try to lure him with a deal worth $285 million.

However, Nike made a good move to counter that offer with a $300 million deal.

LeBron James is the best player in the world. He proved that easily with his MVPs and winning four NBA titles with different teams. Furthermore, he’s also just a few games away from becoming the NBA’s best scorer in history.

As a result, Nike secured the generational star for the rest of his life with this lucrative deal.

Everybody wants to be like Mike. Jordan simply dominated the NBA and established himself as the certified GOAT of basketball. But back then, Nike offered Jordan a five-year contract, worth $500,000. At that time, the amount was already unusually high for a shoe endorsement.

Nevertheless, it was still a major win for Nike. Air Jordans were a hit and still are to this day. Furthermore, Michael Jordan continues to earn enough to maintain his billionaire status thanks to his Jordan brand.